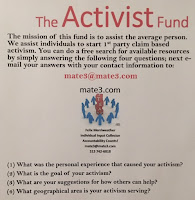 My First Detroit Youth Group was started in 1972to distribute circulars that promoted voting and the election of Coleman A. Young as Mayor of the city of Detroit. The same 13-people from the circular distribution group later joined what we called The People Organization which was founded at the end of 1972.

mate3.com
Mate3.com is where answers to 3 questions are collected and applied for connecting suggestions and experiences that are shared by individuals to define problems, support advocacy and select solutions. 24/7